Zenobia was born and raised in Palmyra, Syria. Her Roman name was "Julia Aurelia Zenobia" and Latin and Greek writers referred to her as "Zenobia" (Greek: ἡ Ζηνοβία) or as "Septimia Zenobia"—she became Septimia after marrying Septimius Odaenathus. She used theAramaic form "Bat-Zabbai" (בת זבי‎) to sign her name. Arabic-language writers refer to her as "al-Zabba'" (الزباء‎).

She belonged to a family with Aramaic names. She herself claimed descent from the Seleucid line of the Cleopatras and the Ptolemies. Athanasius of Alexandria reported her as "a Jewess follower of Paul of Samosata", which would explain her strained relationship with the rabbis.
Later Arabic sources provide indications of her Arab descent and thus argue that her original name was Zaynab. Al-Tabari, for example, writes that she belonged to the same tribe as her future husband, the 'Amlaqi, which was probably one of the four original tribes of Palmyra.[4] According to him, Zenobia's father, ‘Amr ibn al-Ẓarib, was the sheikh of the 'Amlaqi. After members of the rival Tanukh tribal confederation killed him, Zenobia became the head of the 'Amlaqis, leading them in their nomadic lifestyle to summer and winter pastures.
Zenobia's father's name is unknown. She was styled Bit-Zabbai (daughter of Zabbai) in Palmyrene inscriptions. In an inscription found in Palmyra, Zenobia is called the daughter of Antiochus. However, this "Antiochus" is not recorded on other inscriptions and therefore neither his lineage or position is known and it is more probable that Antiochus was not the father but an ancestor of Zenobia. According to the Augustan History (Aurel. 31.2), Zenobia's father's name was Achilleus and his usurper was named Antiochus (Zos. 1.60.2). The name "Julius Aurelius Zenobius" appears on a Palmyrene inscription and based only on the similarities of the names, Zenobius was suggested as the father of Zenobia. Zenobius was Governor of Palmyra in 229.

Zenobia also claimed descent from Dido, Queen of Carthage and the Ptolemaic Greek Queen Cleopatra VII of Egypt. Though there is no concrete evidence of this, she did have knowledge of the ancient Egyptian language, showed a predisposition towards Egyptian culture, and may have been part-Egyptian through her mother. According to the Augustan History, an imperial declaration of hers in 269 was sent to the citizens of Alexandria, Egypt, describing the city as "my ancestral city". This declaration only fits Vaballathus, the son of Zenobia. The historian Callinicus dedicated a ten-book history of Alexandria to a "Cleopatra", who can only be Zenobia.

Classical and Arabic sources describe Zenobia as beautiful and intelligent, with a dark complexion, pearly white teeth, and bright black eyes. She was said to be even more beautiful than Cleopatra, differing though in her reputation for extreme chastity. Sources also describe Zenobia as carrying herself like a man, riding, hunting and drinking on occasion with her officers. Well-educated and fluent in Greek, Aramaic, and Egyptian, with a working knowledge of Latin, she is supposedto have hosted literary salons and to have surrounded herself with philosophers and poets, the most famous of these being Cassius Longinus. 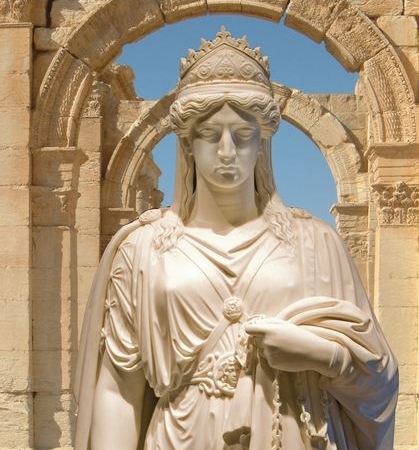